May Day – The Shortest Trip, The Longest Day

Ok let me start by saying that despite the title being called “May Day”, nothing bad happened on this trip. In fact, it was quite the beautiful day in the park. It’s called May Day simply because it was only a day trip, and it was during the month of May (very clever, I know).

With the early ice out, Algonquin Park was open two weeks before the original opening date. That meant there would be two weeks with practically no one in the park, which lined up perfectly with the approximate two week window before bugs start biting. The first of those two weekends I already spent in the park, you can read the trip report here: My First Ice Out Canoe Trip In Algonquin Park (Kind Of). And now it was time for the second weekend. The weather was beautiful, but there’s this little holiday you might have heard of called Mother’s Day that was taking place on the Sunday, so without using any of my precious vacation days from work, I was limited to a day trip on the Saturday.

I had done a few 1-nighters before, but I had never done a trip where I would leave in the morning and return home that same evening. But I knew all of the driving would be worth spending a full day alone in the park.

So here was my plan. Since I wanted to keep driving to a minimum I decided to day trip on the west side of Hwy 60, which is the closest entrance to the park for me. I also wanted to visit lakes that I didn’t already have in my campsite reports, but I needed to make sure the lakes were relatively vacant so I could actually visit the campsites. After checking the reservation system, the vacancy was clearly not going to be an issue.

I woke up at around 6:00 AM, got all my gear in my car and my canoe strapped up top, and was on the highway by 7:00 AM. The plan was to start from Cache Lake and go through Tanamakoon Lake to Little Island Lake and then back. I would stop to check out all of the campsites on those two lakes that weren’t occupied. I was anticipating being on the water for 6-7 hours.

I made it to Cache Lake and was ready to launch by around 9:30 AM. There was a father and son about to head out on an overnight to Delano and we ended up chatting for a while about our canoes. He really liked my 14-6 from H2O Canoe Company… in fact he liked it so much he said he was in the market for a solo canoe and after our chat he was seriously debating ordering one after his trip.

Right as we were wrapping up, a park warden stopped by to check permits. In my decade of tripping I can count on one hand the number of times I’ve even SEEN a park ranger or warden, and now ironically I ran into a conservation officer on my trip the week prior, and then a park warden on this trip. I joked about that to the warden and he told me I should buy a lottery ticket.

Anyways, I finally made it onto the water at 10:30 AM. It was a bit later than planned, but there was still plenty of time in the day. I had a decently strong tailwind guiding me through a quiet Cache Lake and into the narrows towards Tanamakoon Lake. Tanamakoon Lake was completely empty with the exception of a few people on the camp docks, presumably getting the grounds ready for the upcoming season.

I stopped at every campsite on Tanamakoon Lake. Some of the sites I didn’t like, but there were a few that were pretty nice. The small island was my favourite, but that’s because I have a tendency to like those small exposed island campsites. But no matter how nice any campsite is, if it’s that close to Highway 60 and on the same lake as a camp, it just won’t be an ideal destination campsite for me. I was able to hear the highway from a few of the northern campsites, and I had pretty consistent cell service throughout the lake. It definitely isn’t the type of lake to stay at if you’re looking for a remote trip. 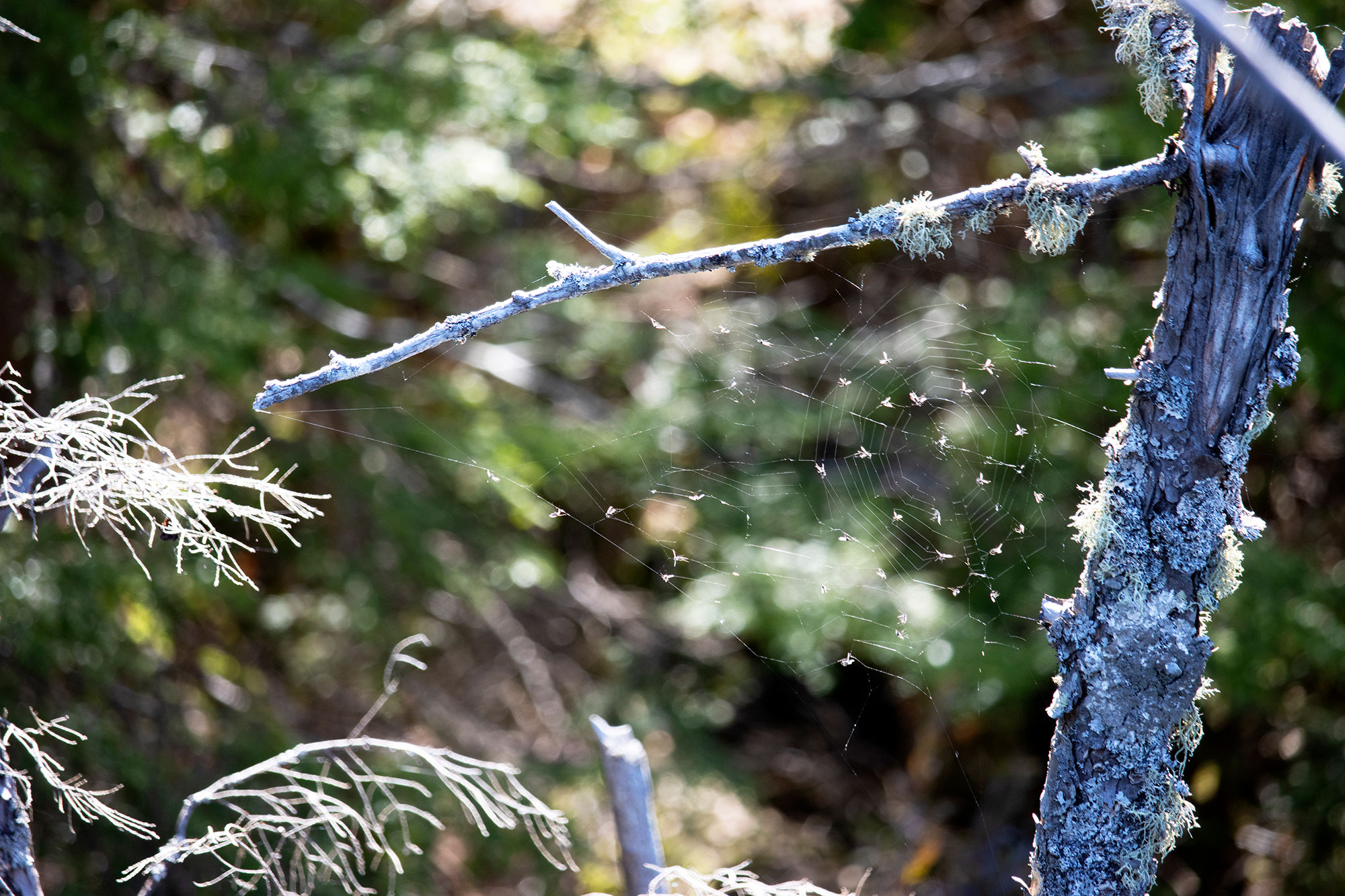 By the time I finished on Tanamakoon Lake the sun in the sky started providing some warmth after the otherwise chilly morning. The wind was still very strong at my back and I was hoping it would calm down by the time I needed to do the return journey back.

The two portages into Sheriff Pond and then Little Island Lake were both very short and quite easy, but a couple of the landings were tough with the high water levels. At the Sheriff Pond landing after the 120m I saw some very large and very fresh moose tracks, but unfortunately I wasn’t able to spot any moose among the marshy shorelines.

I made it into Little Island Lake just after 1:00 PM and started checking out the campsites. I followed the northern shore eastward across the lake, rounded the big island, and then travelled back, west across the lake. Whoever decided to name the lake Little Island Lake clearly didn’t see the huge island that occupies like 50% of the lake. Joking aside, there are actually a handful of really tiny islands that easily go unnoticed when looking at the lake on a map; but when paddling on the lake, those tiny islands give the lake a lot of character.

On the northernmost island campsite there was a huge pile of bear scat right in the middle of the campsite. It didn’t look like it was from that same day, but it was definitely from after the ice and snow had melted, so within the last 1-2 weeks. The same campsite had a crazy steep incline up from the canoe landing. It was such a steep incline that there was actually a long rope anchored around a tree at the top of the climb so you can hold the rope for support as you climb up. Yeah, I didn’t like that site very much.

I was able to stop at every campsite on the lake except for the southernmost site since that one was occupied by a group. That site did look like the nicest one on the lake though. I was trying to think of which site I liked best from the ones I was able to visit, but it was hard to decide since each site had some definite pros and cons that would appeal to individual preferences. I will say that the northernmost island campsite was by far my least favourite. 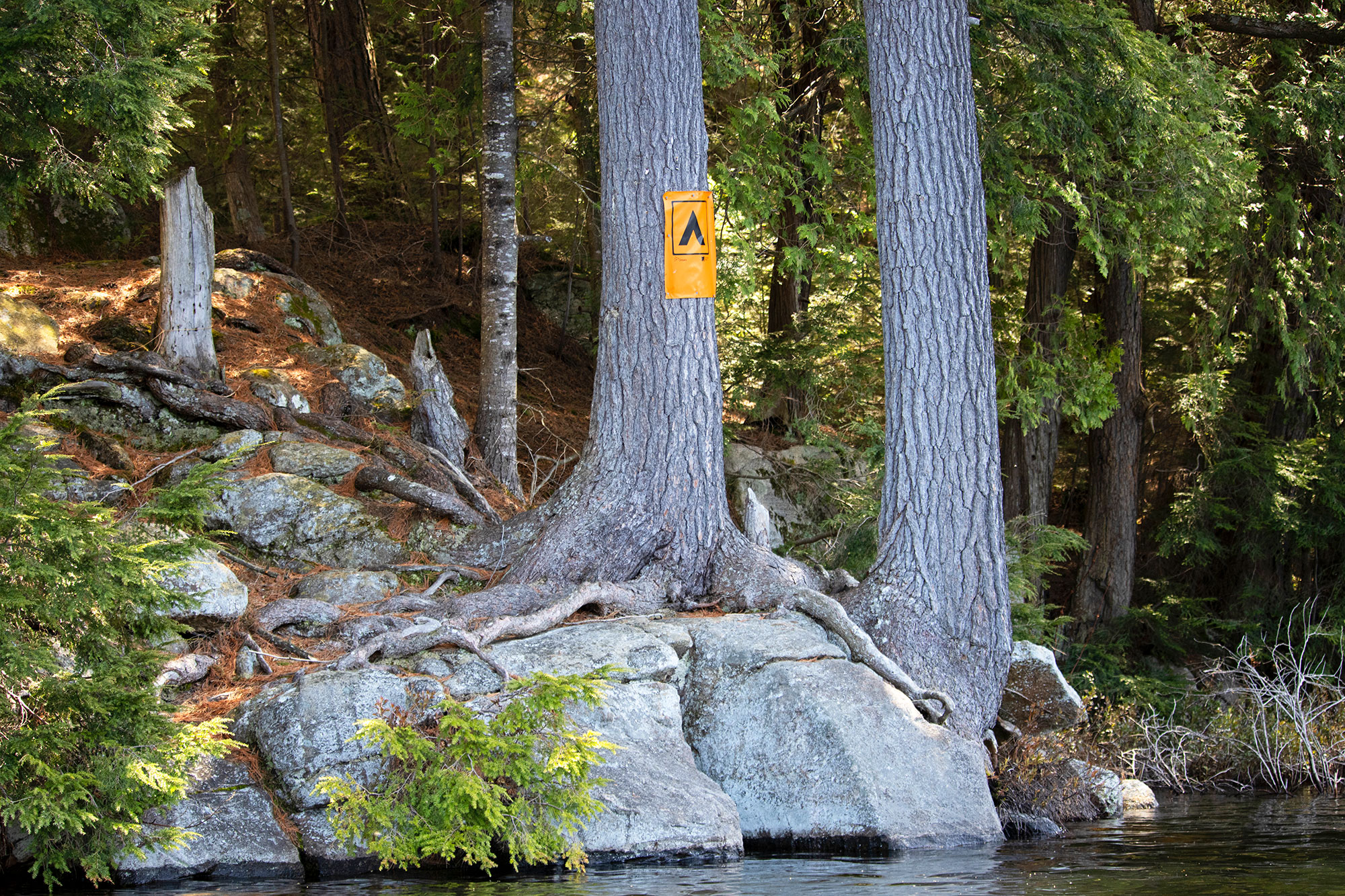 I finished scouting campsites by 2:30 PM and I had nothing left on the agenda other than paddling back to my car. I had been on the water for 4 hours at that point and it was such a beautiful day to be paddling in the park. There were no clouds in the sky and the sun was just warm enough to be comfortable in a t-shirt or sweatshirt without being too hot or draining. Plus, I was happy that I was able to visit 10 of the 11 campsites between Tanamakoon Lake and Little Island Lake. The winds were quieter on Little Island Lake and Sheriff Pond due to the size and shape of the lakes, but I was a little bit worried about what would happen when I got back to the windier Tanamakoon Lake and Cache Lake.

Well, as expected the winds were stronger on Tanamakoon Lake. Luckily they were a bit more calm than earlier in the morning, so the battle against the headwind wasn’t all that bad. I hadn’t seen anyone on the water all day. Just the father and son before starting the trip, the people at Camp Tanamakoon, and the one group at their campsite on Little Island Lake. But the water was all mine!

I started feeling drained by the time I made it into the narrows towards Cache Lake. It’s not that the sun was super hot or that I had an overly strenuous day or anything like that. It was just the combination of an early wakeup, a long drive, and then several hours on the water. But I still had one final challenge before getting back to my car. The winds decided to pick up once I was paddling the final stretch through Cache Lake. What should have been a 10 minute paddle turned into probably 20-30 minutes until I finally arrived back at the docks.

I made it back at around 5:00 PM after close to 7 hours on the water. Since the wind was coming from the north, it became completely windless as I pulled up to the parking lot on the north shore. The lack of wind made the full strength of the sun become apparent, and I decided I needed a few more minutes to enjoy the park before driving home. I took off my PFD and my shirt and I laid back in my canoe with my eyes closed for about 10 minutes.

After quickly getting everything loaded into my car, I was ready for the drive home. I barely took any pictures throughout the day (other than the campsite reports), and I didn’t take a single video. It was very unlike me, but I knew that it was only going to be a day trip and I didn’t want to be preoccupied with filming.

Overall I’m super happy that I decided to do the trip and it made me realize that day tripping is completely feasible if there isn’t enough time to stay overnight for whatever reason.

The mosquitos were out in swarms in certain areas, mostly at the front of some of the campsites, but thankfully they weren’t biting yet. I knew that this would likely be the last time I’d be in the park until post-bug-apocalypse-season (aka until July or August) so I cherished the time I had and made the most of it.

This was The Tourist’s (my canoe) second time on the water and it already looks like it’s been used for several years. Since I’m constantly checking out campsites, that means I’m constantly landing the boat and pulling it up on shore. Plus, the high water levels have made the landings a bit more difficult to navigate. So unfortunately this accelerates the rate that my canoe gets its beauty marks on the bottom of the hull.

Note to self… when the weather warms up after a chilly morning and I take off my gloves, I can’t forget to sunscreen my hands. It was a funny sight taking a shower that evening and seeing my face tanned, my body pale, and my wrists and hands burnt red. 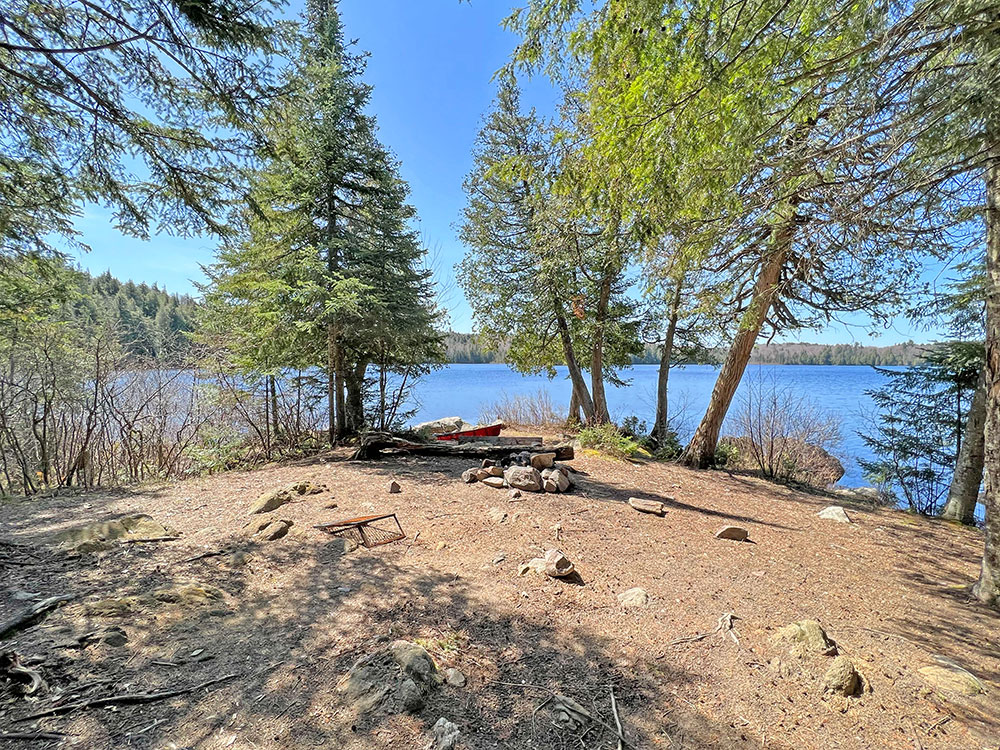 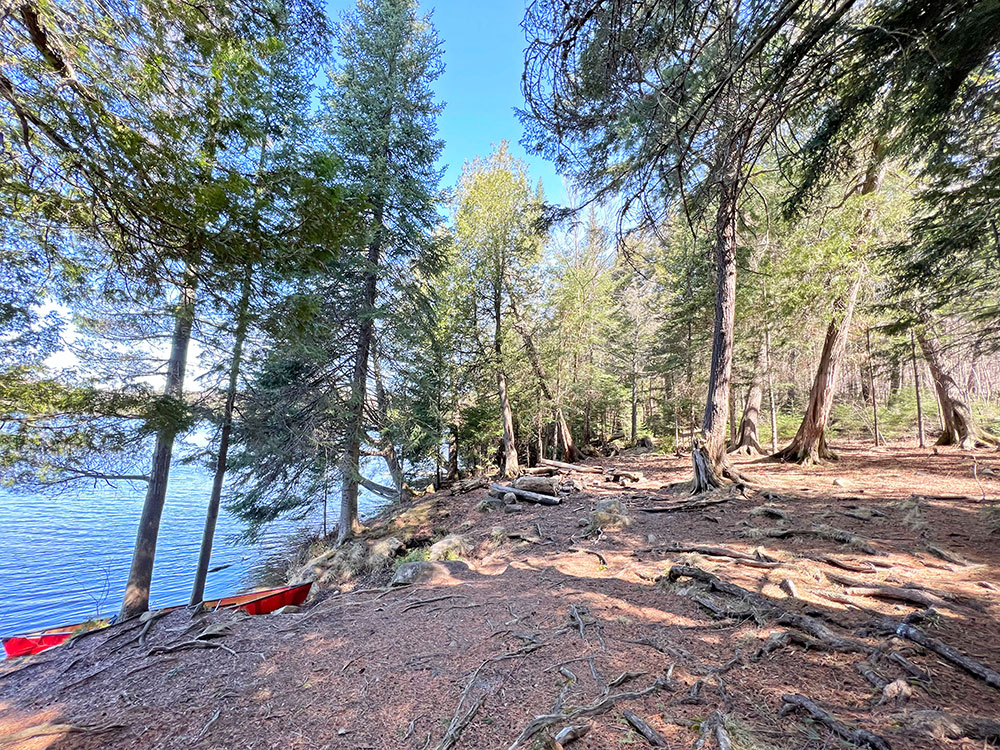 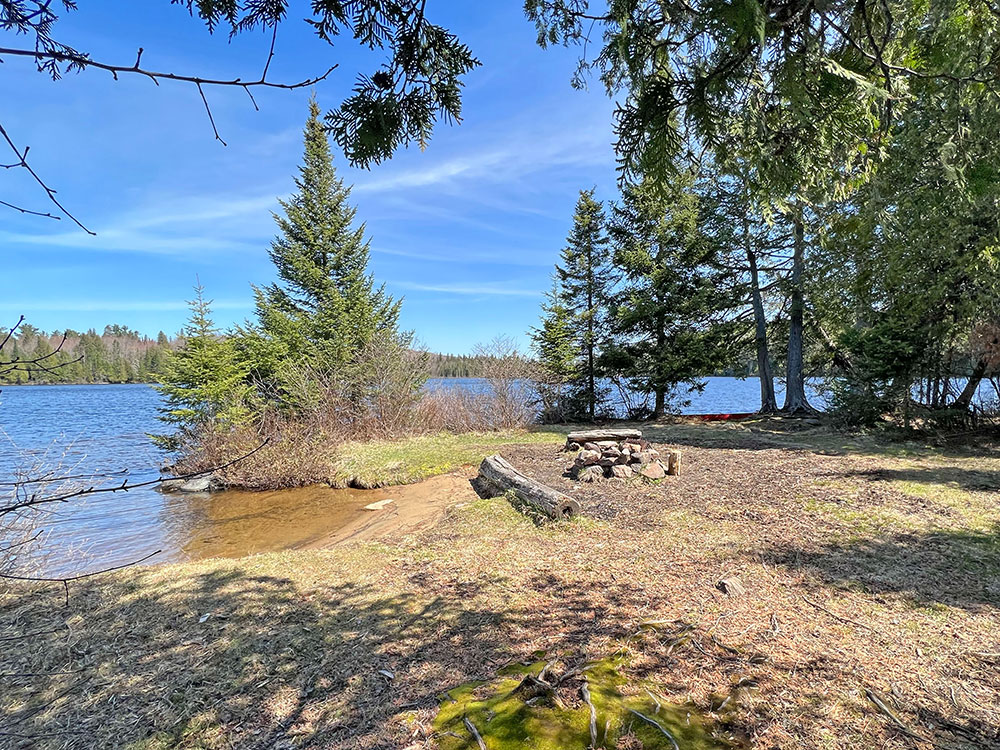 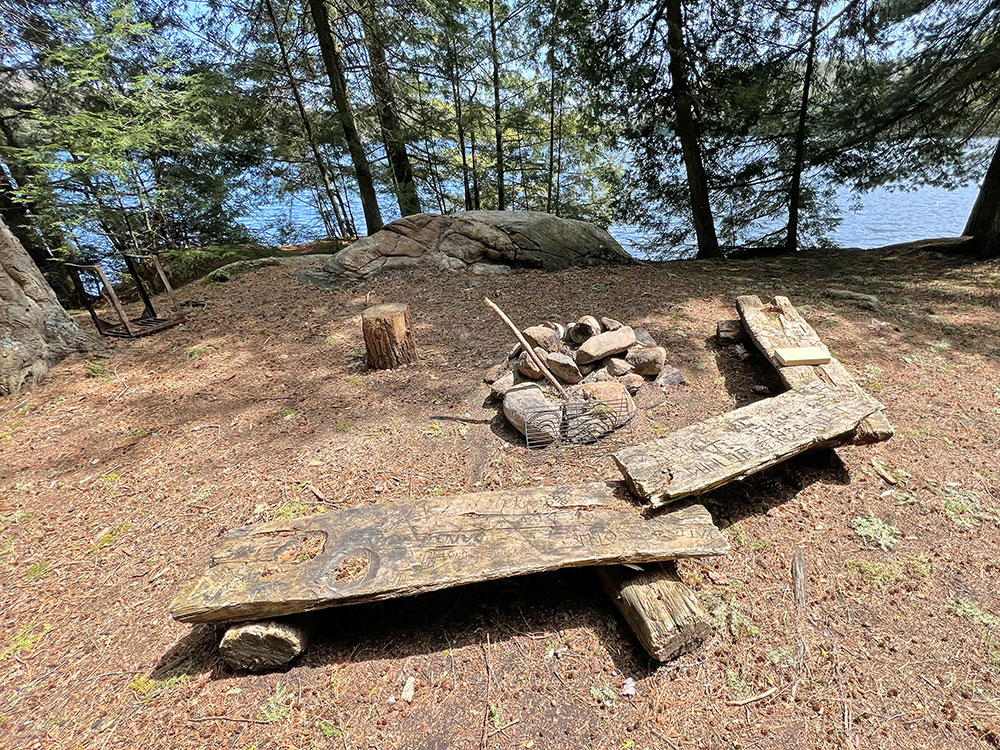 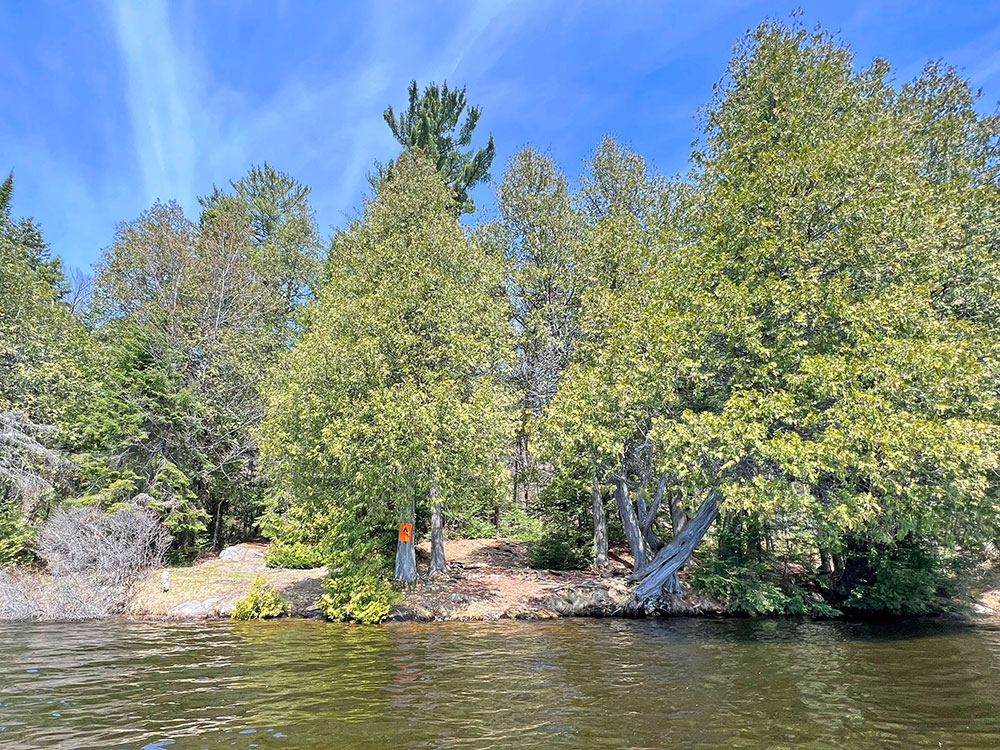 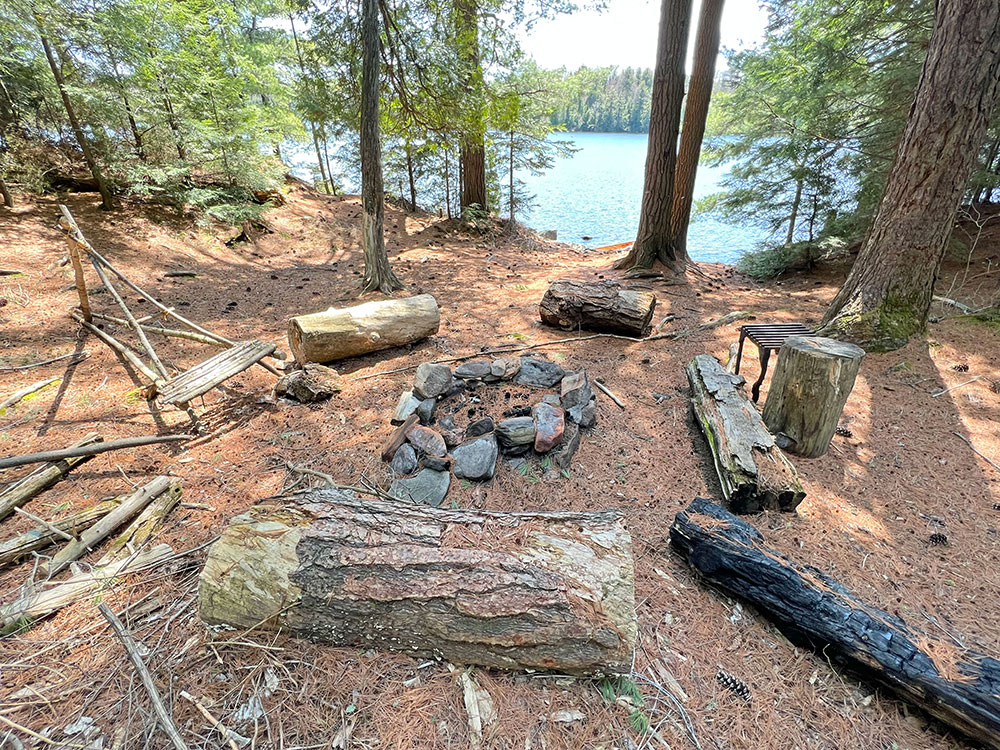 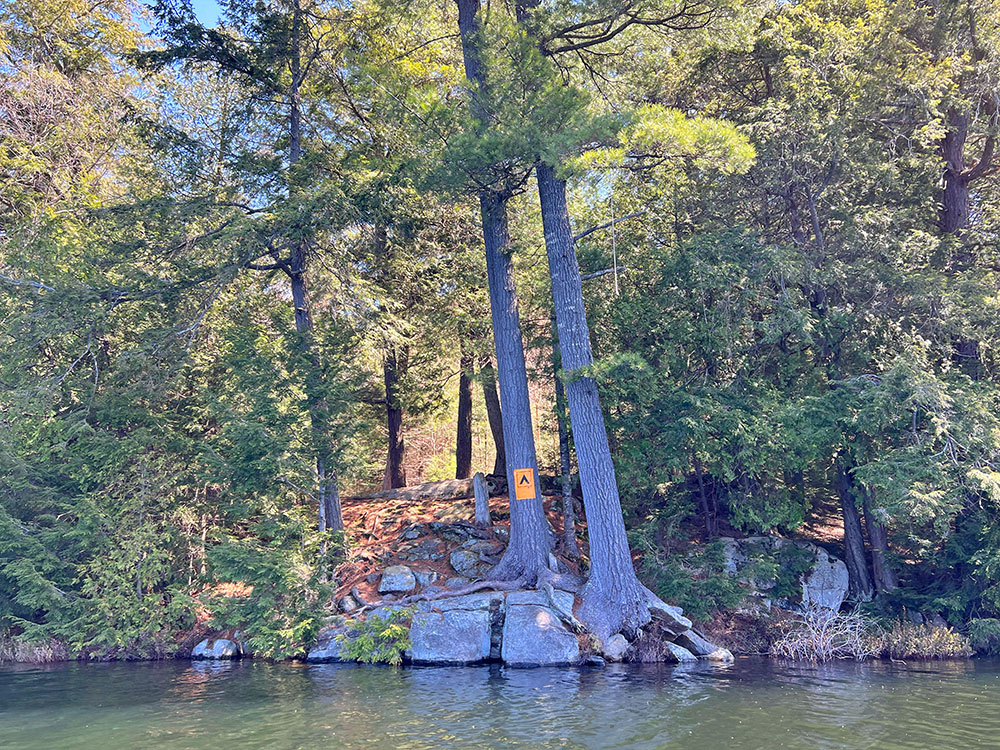 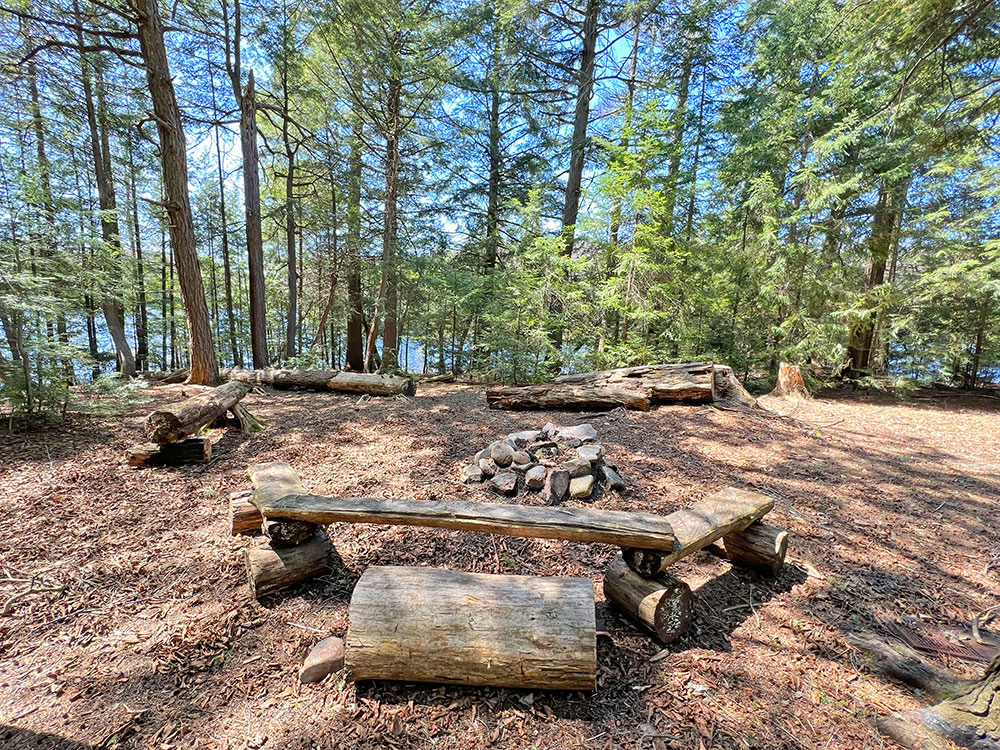 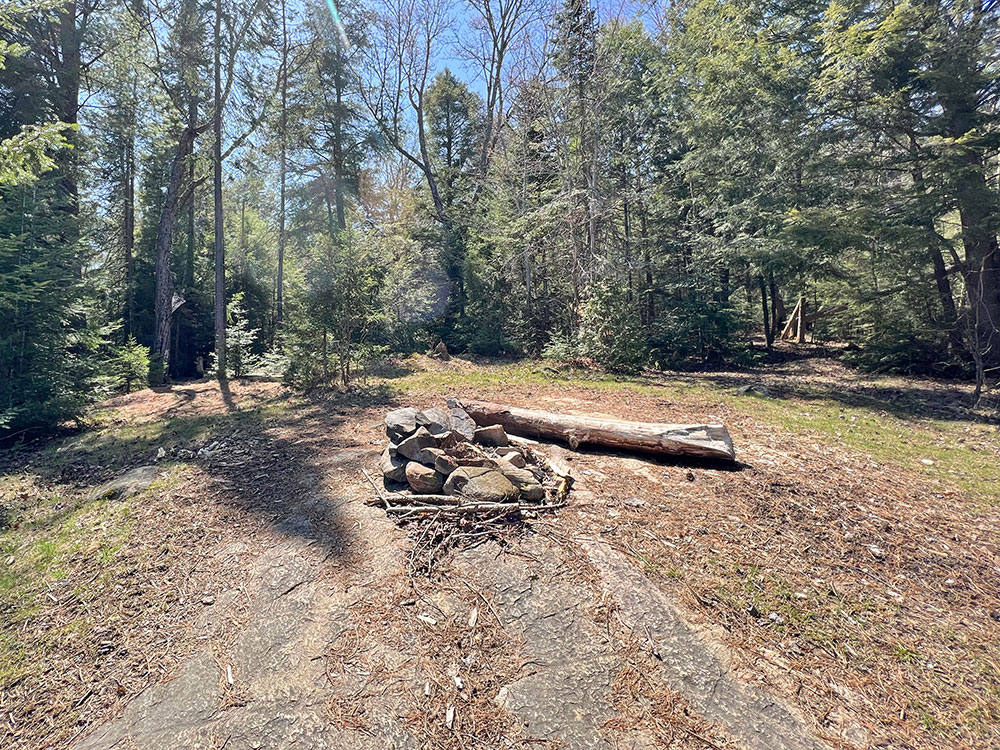