We left Toronto at about 7am and got on the water around 11am. We used an 18.5ft super light from Opeongo Outfitters, which was delivered for only $25. Paddling through Rock Lake was nice, and the portage into Penn was pretty easy. We left our stuff at the end and walked back to take a look at the waterfall off of the portage route. It’s pretty cool and definitely worth the extra 10-15min detour to go check it out.

Next we paddled through Penn Lake and into the stream that leads to the 275m portage. The water levels are very low right now and we weren’t able to paddle through most of the stream, so we had to get out and walk the canoe. The second stream from the 275m portage to the 2170m was similar, though a bit better. There was one beaver dam we had to lift over, but otherwise most if it we were able to paddle through. About 500m into the 2170m portage there was a fallen tree probably 6ft or so off the ground. I was able to maneuver the canoe over it, and the rest of the portage was pretty easy.

We landed on the beachy shores of Welcome Lake, and were struck with some of the choppiest waters I’ve ever had to paddle through. There was a group at the site right by the portage landing, and a group approaching the landing from across the lake. Since we were staying on Welcome (which was fully booked with 4/6 sites), I asked both groups which sites they had seen taken, since we didn’t want to waste time in the choppy water paddling to sites that were taken. We were told the northeast site was taken, but the 3 western sites looked available. We decided to cut right across to the 2 sites on the peninsula, which put us directly against a headwind. As difficult as the paddle was, it ended up being smarter than circling the lake which would put the winds at our side and make us more vulnerable to tipping.

By the time we got to the other side at about 5:30pm, both sites were open, and the wind had died down into a light breeze. The first site on the peak was very dark and enclosed, with very little room to enjoy the sunny evening. The kitchen area was well maintained and the thunder box looked brand new. But overall the site wasn’t too enjoyable so we ended up staying at the one further west. The site has a couple good tent spots, a good kitchen area, a nice view point facing north (where the landing is), and seemed pretty unused for this time of the year. There’s a large rock on the shoreline facing southwest about halfway between the two sites, which is a nice area to watch the sunset. Neither sites have sandy shorelines, unlike some of the other sites on Welcome. After setting up camp, we cooked some dinner, hung our barrel, and called it a night pretty soon afterwards.

FYI there are buoys set up throughout Welcome Lake for a study on Brook Trout, as well as signage posted at each campsite to aware campers of the study and what to do if they plan on fishing. I have a picture of the sign if anyone is specifically interested.

We made some breakfast and hit the water at about 10:30am to head to Louisa. I checked the forecast before I left, and it called for 60% chance of thundershowers for the day. The long stream (river?) from Welcome to Harry was really enjoyable to paddle, but again we had to get out of the boat on several occasions due to the low water levels. Similar situation for the other two streams, from Harry to Rence, and Rence to Frank.

I have a preference for island sites, as well as lakes with only 1 campsite, so Frank Lake is definitely a site I’d like to stay on if I ever do this loop again. The entrance to the 1725m portage into Louisa seemed to be closer to the north shore than depicted on the map, and the yellow marker is facing north which makes it hard to see until you’re actually there. The portage had a few inclines, but was pretty easy, and we made it to Louisa by about 1:30pm.

Our plan was to check out the two northwestern island sites, and paddle east if those were taken. Halfway there we heard thunder and the winds started to pick up; the 2 islands were taken, so we decided to take the first available site to try and set up camp before the storm hit. Luckily the site behind the two islands was open, and even more luckily there was a big pile of firewood left from some generous campers before us. We quickly set up camp just in time before getting about 1-2hrs of heavy rain with some loud thunder. It cleared up afterwards and the rest of the night was clear skies; we cooked some dinner and had a few hours to relax on the large rock face of the site. Everything about the site was great, other than the yelling from children that travelled so easily from 2 of the sites beside us. There weren’t many stars out that night, so once again we went to bed relatively early.

We left the campsite at about 8:30am and were one of the only people on the water at that time. We had the wind at our backs, so we made some pretty good time crossing Louisa. When we got to the 3k portage into Rock, we saw that someone had camped at the end of the portage. They had a kayak which they left halfway through the portage, and walked with the rest of their stuff to the end, where they set up camp. The portage was long and pretty flat, and had lots of garbage along the trail, presumably from the kayakers who seemed to be inexperienced with this whole backcountry thing. Once again we had the winds at our backs as we paddled Rock Lake, and made it back to our car at about 11:00am.

Overall the trip was really enjoyable; nice lakes, streams, waterfalls, campsites, good weather (mostly), etc. There was nothing out of the ordinary or uniquely exciting, but the trip had just about everything you could ask for, and it was a perfect route for a 2 night trip. I’ll be heading back into Algonquin this weekend hopefully, so will post another trip log when I get back. 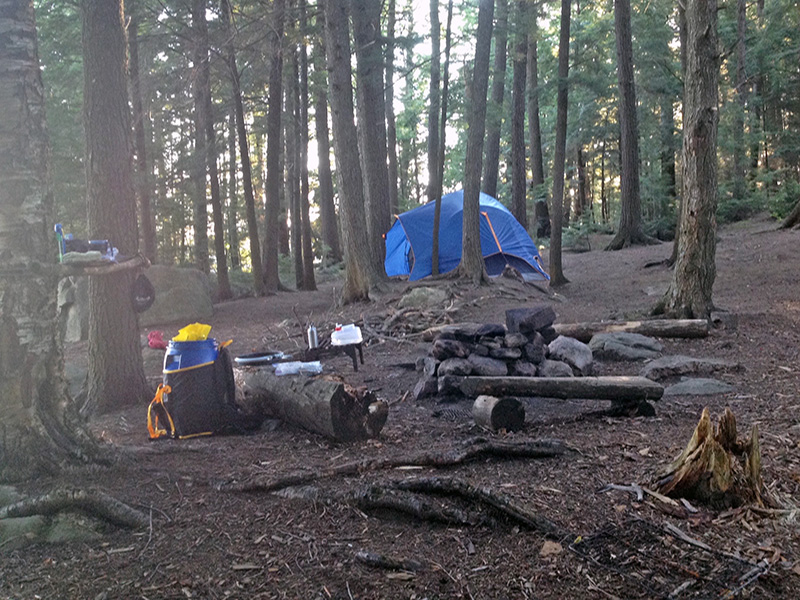 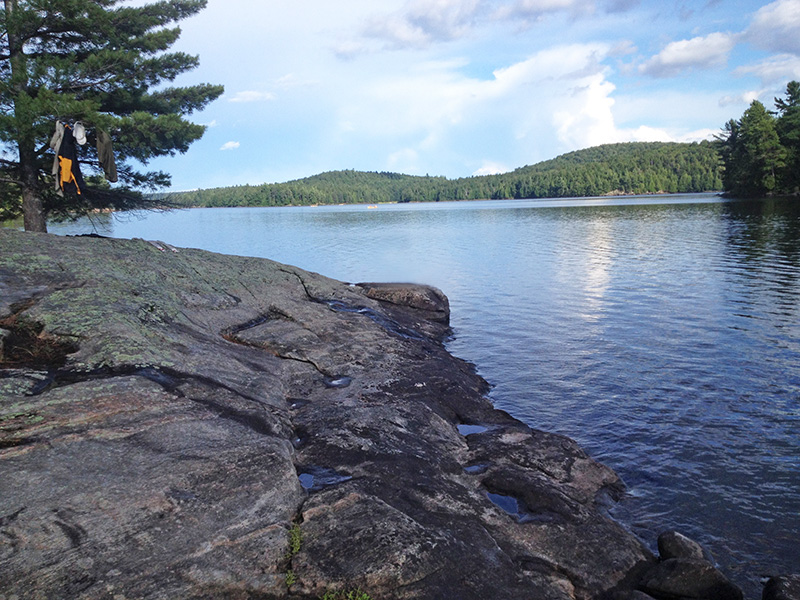