Just like last year, I had Killarney booked for the thanksgiving long weekend, and also just like last year, I did a last minute change to Algonquin. I was supposed to camp on David Lake for 2 nights and hike Silver Peak and The Crack – but I’ve done all of that before, and only wanted to do it again for the fall foliage. But colours were only at 50% and the outfitters told me they weren’t expecting a spectacular season for colours anyways… so I decided to save the money, the longer drive, and the repetitiveness of the trip, and instead do a new route in Algonquin.

A few months ago I heard about Kingscote Lake and the surrounding area, which I never really knew existed. Not only is it at the southern tip of Algonquin, all the way down that ‘finger’ that juts down from the main Algonquin square of land mass, but it also has a divider of several unmaintained portages between the rest of Algonquin, with only a few lakes in it’s small secluded area. It’s a quiet little region isolated from the rest of the Algonquin interior, with an almost pre-determined 2-3 day loop as the main trip option.

The change from Killarney was so last minute that I wasn’t actually able to reserve campsites online, I had to go there in person. I called Pine Grove Point the day before to make sure there were still campsites and canoes available, and then we got on the road early the next day to arrive just as they were opening at 9am.

For our first night on Saturday, there was supposedly 1 permit already issued for Byers and 1 permit already issued for Scorch, and then everything was empty for our second night. We were told that the Scorch permit was issued late in the afternoon the previous day, and they might not have been able to make it to Scorch before sundown, so not to be surprised if we got to Byers and both sites were occupied. I decided to book our permits for 2 nights on Byers anyways and play it by ear – if we needed to push forward to Scorch, we would, but if there was something available on Byers, we’d stay.

After leaving our car at Pine Grove Point and getting shuttled to Kingscote, we started our day paddling through some light rainfall, making our way past the 1470m and 660m portages. There were some muddy sections and a couple steep declines (we were definitely travelling the right way), but overall the portages were pretty easy.

We got to Byers by noon and found the first northern site to be empty; this was the site we were hoping for, but were expecting to already be occupied. Did the existing permit holder take the not-as-nice site? Did they push forward to Scorch? I was curious, but it really didn’t matter.

The site had an amazing west-facing beach front, with a tiny little east-facing beach at the side of the site. The fire pit and seating were definitely below average, and the thunder box was practically in the middle of the site, always in view. But the tent spots were perfect, the surrounding trees aren’t very dense (I tend to like the ‘open’ feeling that this provides), and the views couldn’t be beat. I was happy to call this place home for the next two nights. We took our time setting up camp and collecting wood, and left the wood on the beach to dry out in the sun after the morning rainfall.

We paddled over to check out the other site, only to find it empty as well. This site wasn’t too bad, but it was small and in my opinion it was definitely the lesser of the two. We went back to our site, took a short nap, made an early dinner, and enjoyed the rest of the sun-filled day on our spectacular beach, facing an even more spectacular shoreline of beautiful fall foliage.

After a pretty sunset, the skies became completely dark at around 8:15pm. The moonrise was scheduled quite perfectly, starting just a few minutes later. I followed the short trail that leads to the small east-facing beach and watched the moon rise into the night sky. The forecast called for storms overnight, so I made sure everything was well protected under our tarp (including all of our dry wood!) before heading to the tent for the night.

The forecast called for storms to start at 2am until about 7am, tapering into some lighter rain until about 10am. And that’s pretty much exactly what happened. I awoke at 2am to bright lightning and roaring thunder overhead, with heavy rainfall pounding the top of our tent. The rain started to subside in the early morning, but the winds grew stronger and watching my tent cave inwards with every strong gust, I legitimately feared that the winds would snap my cheap fiberglass poles. But they managed to hold up, and thankfully our tent stayed completely dry and fully erect.

We made some breakfast and got onto the waters, paddling under an overcast sky heading towards Scorch Lake to hike the short Scorch Lake Trail. The 1065m was another easy portage, but the first 100-200m after the portage is full of shallow rocky waters, making it very difficult to maneuver in a canoe.

We paddled through a completely empty Scorch Lake, and now I was even more curious than I was on Day 1 – where the heck were the 2 existing permit holders? Anyways, it didn’t affect our plans at all so I didn’t care to think too much about it.

Scorch Lake Trail is well marked – although probably more than half of the markings are on the ground, stuck to trees that have blown down at some point. The sun started to poke through the cloudy skies during the hike, and when we got to the top, the clouds started to disappear as the sun illuminated the fall colours on the trees ahead.

The lookout gives a nice view over Scorch Lake, including the insanely long beach attached to the eastern campsite, as well as the rolling northern hills in the distance. The field of view is pretty small, with lots of tree coverage preventing a full panoramic sight. There’s also very limited places to sit and relax, but luckily we were the only ones there so we were able to find somewhere to sit down for a little while. The fall colours were very pretty, with full orange, yellow, reds, and greens scattered amongst the forests ahead. They weren’t as vivid or ‘bright’ as previous years, but it was still much better than I was expecting based on how the season has been going.

On our way back to Byers, I stopped to look at all of the campsites on Scorch Lake. They all had impressive, long beach fronts, with pretty average actual campsites. For people who enjoy the sun, these are great campsites to consider. I was only able to find 3 of the sites though (the 3 eastern sites).

The sun was strong as we paddled back to Byers, and despite not even thinking this would be a possibility in October, I was paddling shirtless and loving every second of it. We spent the rest of the day relaxing on our beach, while the other site was still unoccupied. We only saw 1 group the whole time, and it was a couple camping on the campsite at the start of the 1065m into Scorch – but both Byers and Scorch themselves were completely empty.

I took the canoe for one last solo paddle of the season as the sun started to lower in the sky. Looking at the skies above, I had a feeling we were going to be treated to a very pretty sunset, but I had no idea that it would end up being the prettiest sunset I’d see all season. My quiet, peaceful paddle was followed by a short photo-shoot, and after the sun finally set, we put our large pile of firewood to good use. I stayed up to watch the moonrise again, which was less eventful this time as clouds began filling the sky.

The forecast called for 40-60% rain from 8am-10am the next morning, so the plan was to wake up early and pack up camp before 8am, while everything was still dry.

Well the forecast was partially right. There was some light rain, but it was at 7am, before we had the chance to pack up camp. And it only lasted for 20min – just long enough to get everything wet and dirty before we packed – the most unnecessary and frustrating rainfall possible!

We made it onto the water before 9am and headed towards the 5 short portages through the York River, between Byers and our car at Pine Grove Point. There are some hilly sections throughout the portages, but the portages are all so short that it’s still not very difficult at all. Some of the landings aren’t that great, which I guess is pretty typical for river travelling, but it’s made up for with a variety of rapids and small waterfalls to admire while travelling.

Just like the previous day, the skies began with overcast but started to clear during the early afternoon, with a sun strong enough to warrant more shirtless paddling. I really enjoyed paddling the final stretch of the river (between the last 280m portage and the park boundary).

We eventually made it back to Pine Grove Point, bought some extremely oversized scoops of ice cream from their shop, and made our way back to the GTA, happy we weren’t stuck in the traffic inevitably occupying the 400 series highways.

I’m happy I was able to do this route and check off some more new areas for my books. It’s so secluded from the rest of Algonquin that it really does give off a different sort of vibe – I almost didn’t feel like I was in Algonquin at all. But I enjoyed Byers and Scorch Lake, and the lookout was pretty nice as well. The days were relatively short, but there are still some decently long portages to keep you from feeling like it’s a lazy trip. The fall colours were much better than I was expecting, and even though they weren’t so vivid, I think it must have been peak in that area of the park (I saw pictures from some friends closer to highway 60, and it was definitely not as nice up there). This was the first trip all season that I saw absolutely zero exciting wildlife – just a few frogs, some birds, and one family of loons.

I really enjoyed the trip, but here’s to hoping next year I actually follow through with my Killarney plans for Thanksgiving weekend! 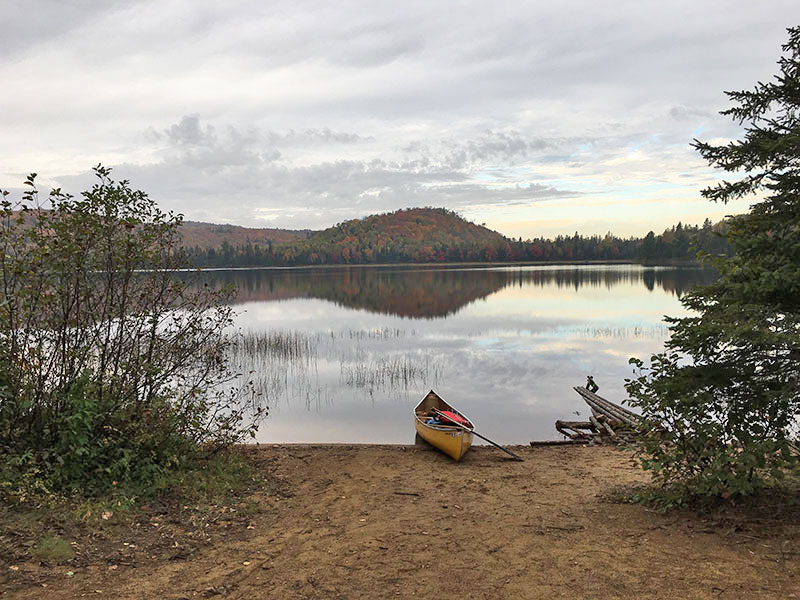 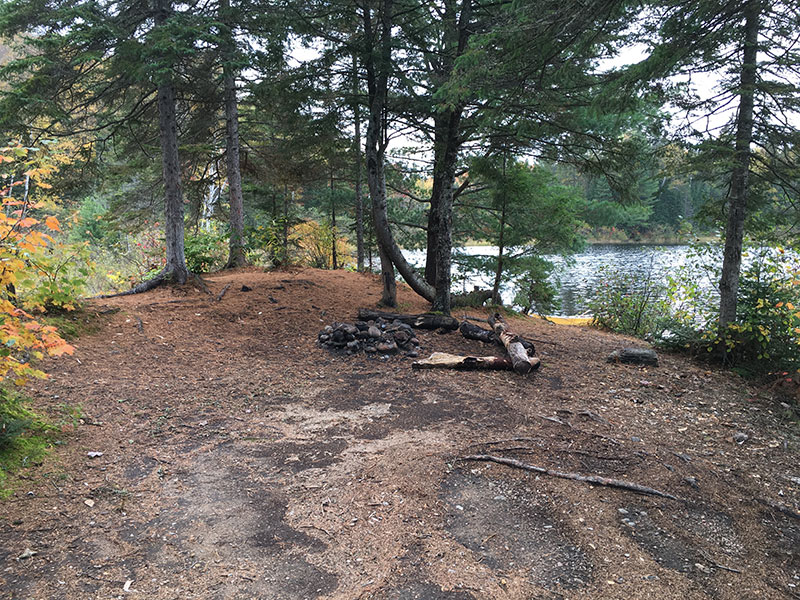 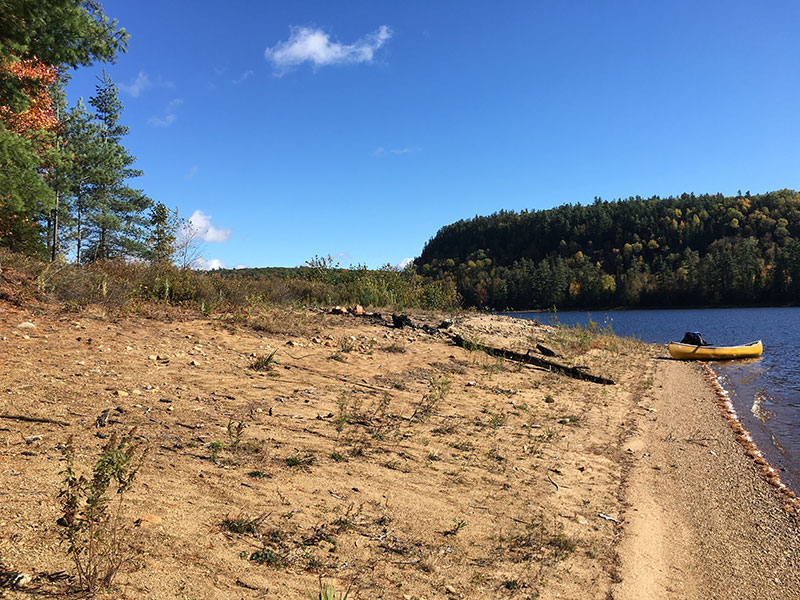 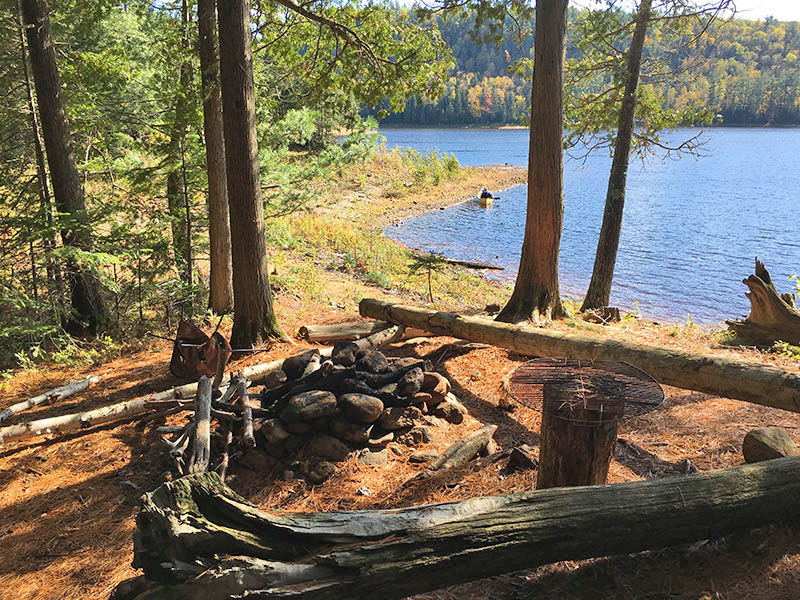 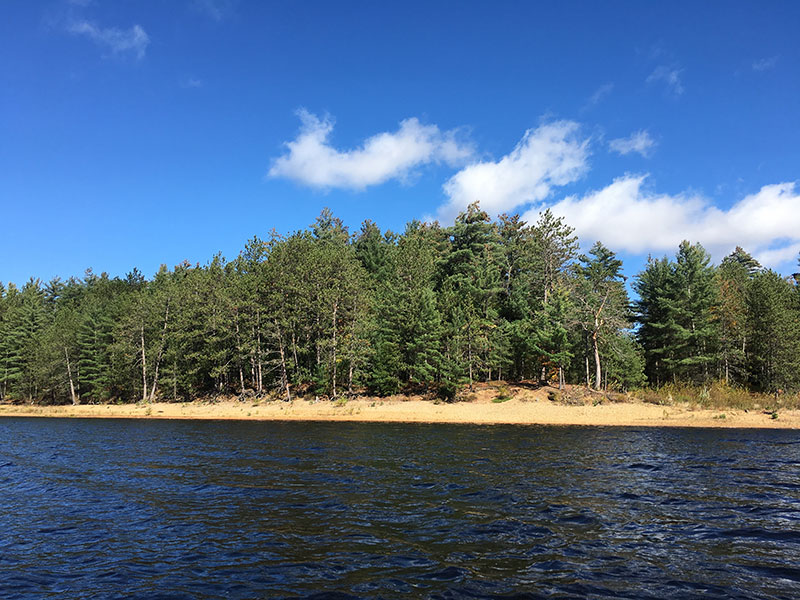